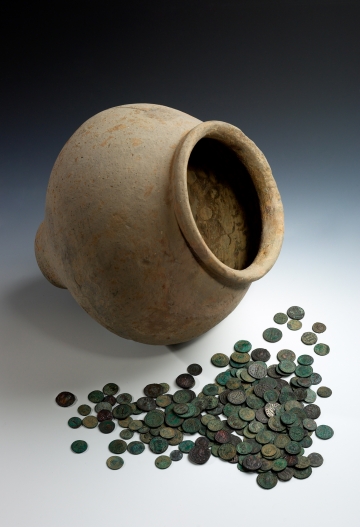 Rob Green is passionate about unearthing history and collecting coins and relics. He is also interested in reading, hiking, and camping. You can follow him on his blog https://metaldetectorplanet.com/

Laurence Egerton found a hoard of 22,000 coins in Seaton, UK. These are Roman coins that were minted between AD 260 and AD 348. Some of them were specially issued to celebrate the foundation of Constantinople by the emperor Constantine the Great.

The coins were in very good condition, the people that they depict were clearly visible. The experts cleaned and examined them. Cleaning such a large collection isn’t an easy task even for the museum experts. Cleaning the coins one by one using brushes and common tools keeps them intact. However, it is time-consuming.

On the other hand, using chemicals is faster and easier. However, the coins can be damaged. And nobody wants to do that to this precious historical collection.

In total, 10 months were required to clean and organize this hoard. After that, a commitee of coin experts examined them and they estimated that it is worth 100000 USD.

The Royal Albert Memorial Museum was interested in these coins. So they launched a fundraising campaign to buy them from the finder and the landowner. They are now displayed for the public in this museum, which is not far away from Seaton.

Laurence is a 51 years old builder who lives in the UK. He spends his spare time scanning the ground with his metal detector looking for treasures. Most of the time, he ends up digging nothing more than trash. But in November 2013, he made his life-changing discovery. He immediately reported what he found to the authorities who sent a group of professional archeologists to excavate the coins. This operation lasted for 3 days and every night Laurence slept in his car to guard the site from potential thieves.

Roman coins can be found all over Europe. For example, a supply of 24,000 bronze coins was found in Luxembourg. It is called the Hoard of Dalheim-Petzel. A farmer discovered it in 1842. They were placed inside three pottery urns. They were acquired by the numismatist Theodore Ignace de la Fontaine. A small fraction of this collection is displayed for the public in the Musée National d’Histoire et d’Art – Luxembourg.