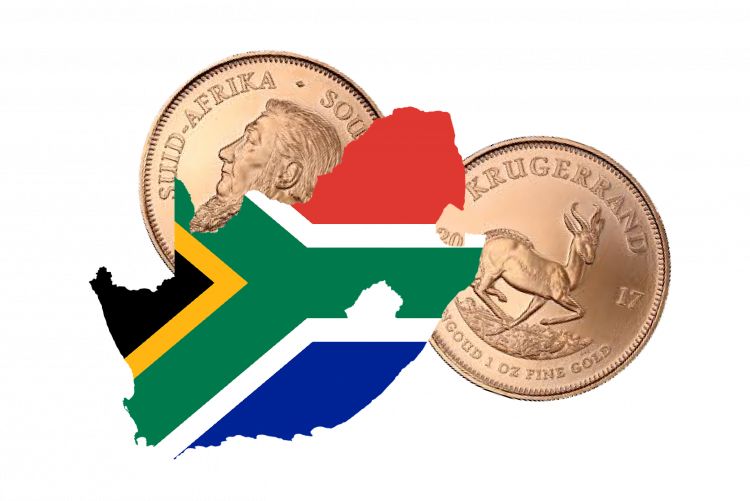 In 1886 one of the richest gold deposits on the planet was discovered in the Witwatersrand Hills. Paul Kruger, President of South Africa, founded the South African Mint in 1890, profiting from this abundance of gold.

In 1967, the South African Mint created the Krugerrand, a 1 ounce gold coin with a legal tender status. Its name is a reference to Paul Kruger and South Africa’s currency: the rand. This coin, made of 92% pure gold and 8% copper, was the first coin to contain an ounce of gold and to compete with the Sovereign Gold. The objective was to enable the country to commercialize its gold resources.

It was a resounding success throughout the world, particularly thanks to American citizens. Although President Franklin Roosevelt dictated the confiscation of gold and the criminalisation of private ownership of American gold coins and bullion in 1933, American citizens could possess foreign coins. Thus, when the Krugerrand arrived on the American market, American citizens immediately adopted them to protect themselves against deflation of the American dollar. Its huge success with investors around the world has encouraged other countries to issue their own investment coins.

The obverse of the Krugerrand depicts the portrait of President Paul Kruger facing left. Around his portrait, we can see the inscriptions “Suid Afrika” and “South Africa”.

The reverse pictures a springbok antelope galloping through the savanna. The inscription “Krugerrand” appears curved above the springbok. We can also read the name of the coin, the year of issue and the gold content. The springbok is an internationally famous symbol of South Africa, which makes it a very relevant choice.

Economic sanctions against South Africa for its policy of apartheid made the Krugerrand an illegal import in many Western countries during the 1970s and 1980s. Despite these sanctions, the Krugerrand accounted for 90% of the global gold coin market.