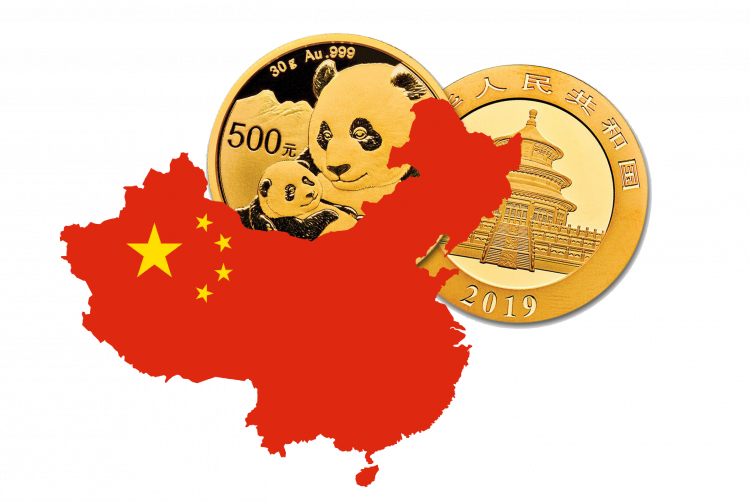 In 1982, the People’s Republic of China introduced the Chinese Gold Panda coins, also known as “Gold Panda”. This initiative was largely due to the success of the South African Krugerrand with the objective of achieving the same results. Its name comes from the panda on its reverse side, which is not insignificant. Indeed, each country has a symbol representing the identity of the nation and the panda is China’s most famous one. In Chinese culture, the panda is a symbol for friendship and peace. It’s loved by people all over the world and is known for its gentle temperament, innocence and joy.

Like the Canadian Gold Maple Leaf or the Australian Gold Kangaroo, these coins contain 99.9% pure gold.

From their creation until 2016, there were 5 denominations ranging from 1 ounce to 1/20 ounce. Since 2016, in order to better respond to the international popularity of the coins, the People’s Republic of China has started to mint metric-sized Gold Pandas, making an approximate conversion from ounce to gram sizes. This new range therefore includes 30 grams, 15 grams, 8 grams, 3 grams and 1 gram coins.

The obverse of the coin depicts the Temple of Heaven, the oldest Taoist temple in the country located in Beijing. There is also the inscriptions “People’s Republic of China” in Chinese characters with the year of issue. The commemorative coins also bear an inscription specifying the theme of the commemoration.

The reverse depicts images of pandas that change every year, making the coins even more attractive to collectors.

For some coins, only one mint is responsible for the year’s production; for others, it is several mint workshops, which leads to slight variations in the coins, making them a collectible as soon as they come into circulation.

They are produced in very small quantities, which makes them highly coveted by collectors all over the world. In addition, the coins change every year, so the supply simply cannot meet the growing demand. As a result, the prices of a large number of Panda Gold coins are rising.

It is a very suitable item for collection and attracts the interest of many collectors around the world.